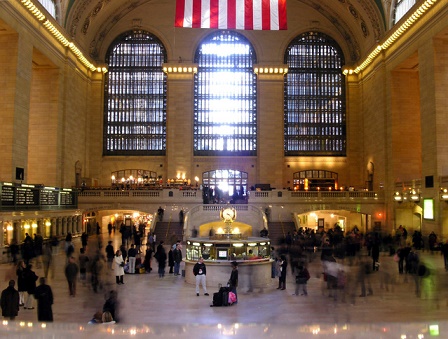 Address: 89 East 42nd Street in Midtown Manhattan
Grand Central is one of the largest train stations in the world with 44 platforms and 67 tracks. Over 150.000 commuters use the station every day.
The Metro-North Train consist of:
– Harlem Line
– Hudson Line
– New Haven Line

There is not a direct rail service between JFK Airport and New York City. The airport train (“AirTrain”) connects JFK Airport with Howard Beach Station and Jamaica Station. From there passengers can transfer to the New York subway or Long Island Rail Road train (LIRR).

Amtrak trains to other USA cities